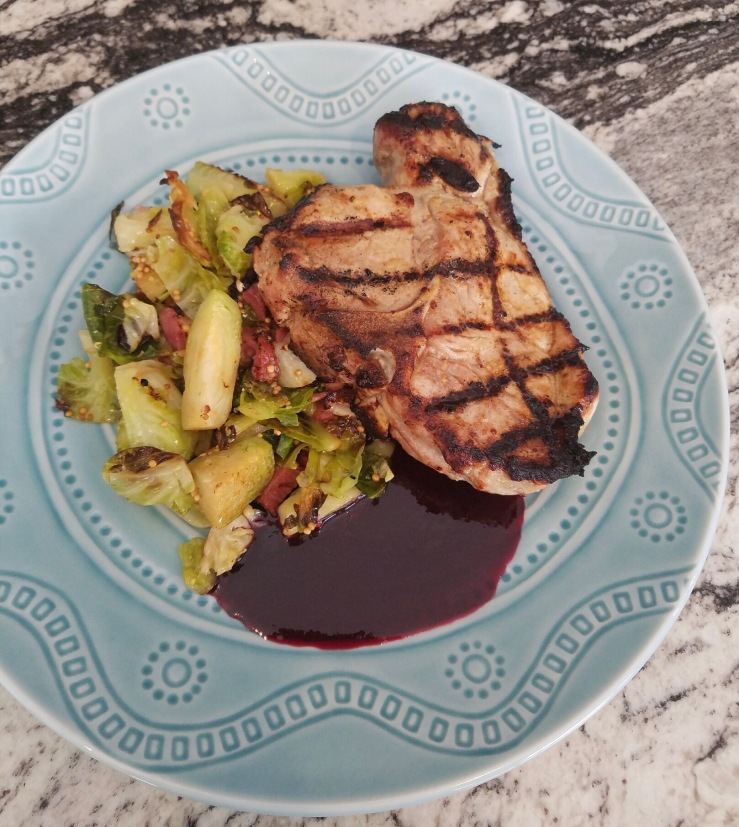 I kinda stumbled into this dish. I’ve been traveling and didn’t want a bag of blueberries I got in my farm bag to go to waste, so I started out making them into a syrup I could freeze and use for cocktails, desserts, or pancakes down the road. After I had it jarred and ready to go, I realized how awesome it would taste with the dinner I had whipped up. Boom roasted, an okay dinner into a clutch one with a simple good idea.

A gastrique is basically just a sweet and sour fruit sauce. This version is pretty basic (just a weeknight dinner) but you can fancy up the sauce with garlic, shallots, and herbs if you’re feeling it. The tangy sauce tasted great with the smokey pork chops, and the sweetness complimented the spicy mustard and vegetal Brussels sprouts. For a meal on the fly, it turned out super balanced!

Remix the dish: Use this same technique to turn strawberries, cherries, peaches, blackberries, or raspberries into a syrup. Mix them into cocktails, drizzle over ice cream, or eat with pancakes, french toast, or biscuits.

If you wanted to go real fancy with the sauce, treat it like a pan sauce  and simmer it in a frying pan with shallots, garlic, herbs, and some butter. I just wasn’t into putting that much effort into it that night.

If you’re strapped for time and just want something sweet, fruity, and tangy for a dish, throw a few big scoops of good jam into a frying pan, thin with water, and heat with a dash of salt and some dried herbs/garlic powder. Poor man’s sauce!